In February 2014, over 20 families in the Lenoir County area found out about the Army’s “FREE Bomb-Sniffing Dog” giveaway and decided to make the drive to K2 Solution’s training facility in Jackson Springs, NC. It is our belief that these families were trying to do a good thing. While the Army’s Office of Provost Marshal General ran the adoptions for these Army-owned TEDD military working dogs, two individuals from Lenoir County assisted in facilitating the adoptions within their community, and in some capacity at the adoption event.

Some of you may be friends of these individuals due to them helping you find info on a dog. Think about how they knew this information and make your own decisions.  Just know that others were not helped, and information was withheld. Intentions may have been good at the beginning, but when questions started being asked about what went down … those who ran the show took cover.

Not everything we know about the current status of these dogs has been posted, but it has been provided to the House Armed Services Committee and will be included in the public report and investigation.

If you know where some of these dogs are and can help reunite them with their former TEDD handlers, please help.  A couple of the Lenoir County dogs have already been reunited with handlers, and we thank them for their kindness.

Families who still have these dogs: there have been reunions and communications going on behind the scenes, we can help make a reunion happen. Time is running out. You have the chance to do the right and heroic thing. You can do so without it being public knowledge.

The following information has been provided to the House Armed Services Committee: 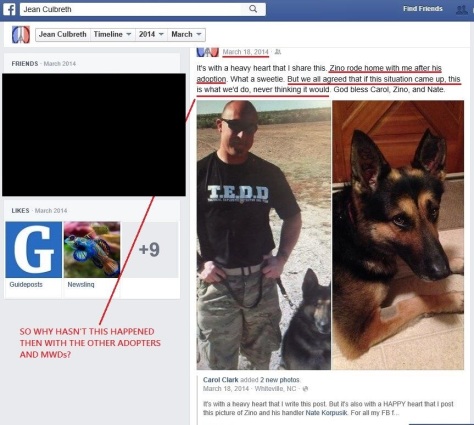 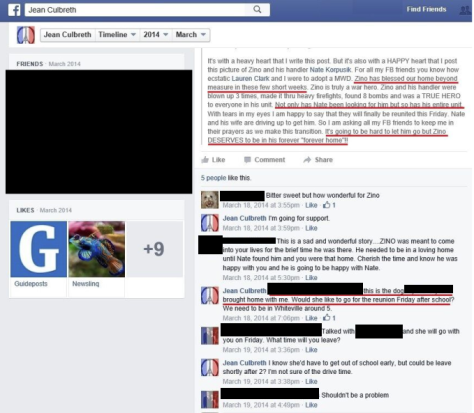 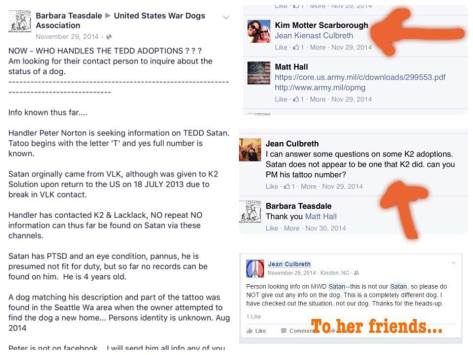 But, back to the original instigator – Robert Squires. He made this happen for all those members of his friends and family. Whether they took one TEDD or several, those whose only link and knowledge of this event was because of him: what about Squires? Jerry took multiple MWDs, but Squires facilitated the taking.

Robert Squires was even quoted by The Free Press in Kinston, North Carolina, as being with the “Welcome Home Canine Corps.”

He thanked the community for stepping up and providing good homes for the canine vets, with the Tactical Explosives Detection Dog program coming to a close.

“And we had a bunch of dogs we needed to find good homes for,” Squires said. “I sent a text to my sister-in-law, she made a phone call, and next thing I know, I had numerous people willing to take ownership of these fine dogs.”

Squires neglected to mention that he also took home a dog.
Kyra5 R625 has 2 handlers who would love to reunite with her.

We’ve read the claims that there just wasn’t enough time to contact handlers. We know that those in charge of the TEDD dogs promised to let handlers know when they would become available for adoption. Why wasn’t the same effort put into finding foster families for the dogs until handlers could be contacted?  Why were adopting families told that handlers had been contacted and didn’t want the dogs?

As the TEDD Coordinator/LNO, a contract employee, Squires was on the taxpayers’ dime, to ensure compliance with Federal laws, rules and regulations, but he recklessly and contemptuously disregarded all of the above. He was friends with Jerry and had to, at a minimum, reasonably believe that Jerry was not going to keep 4 dogs (or, perhaps, even more), but he still signed or permitted Richard A. Vargus, the MWD Program Manager, to sign, as an “Agent/Representative of the US Government,” understanding that the contract would be breached if Jerry did not retain all the dogs as pets. These are facts. There is no lack of clarity or conclusion. And, because Jean transported Zino for Jerry, she, also, had to know that he took at least two dogs. Jean bragged about speaking with the Army investigator, while controlling the conversation. If she withheld this information: that Squires and/or Vargus provided a member of her party more than one dog, which within days was provided to others, while claiming no knowledge of anything untoward at the event, we question the wisdom of that behavior, which will surely be reviewed and examined by the Secretary of the Air Force attorneys/investigators. But, in regard to these known facts, the major focus has to remain on Squires; he was the facilitator, as one of the two officials signing as an Agent/Representative of the US Government, permitting Jerry to take multiple MWDs. Wouldn’t Squires, then, have breached his own employment contractual obligations, if even a possibility existed of Jerry’s willful disregard of the terms of the adoption contract?

From our point of view, Squires felt empowered to do whatever he could to enrich his family and friends to the detriment of those the Congress, the American public and the Department of Defense wished to protect. And, if that claim that the Provost Marshal General wished to forego Law Enforcement in favor of handlers is true, then, everyone in the chain of command above Vargus, was thwarted by this behavior.

It is our opinion that Squires was completely and utterly derelict in his duty to his employer, us, the United States taxpayers. From our perspective, this is the type of case that any US Attorney would dream to prosecute: heroic dogs, brave soldiers ignored, friends and family of the accused enriched. And, for any who think ambiguity in North Carolina law is going to keep those “adoptions” to the second or third “owner” legal or the original claimant free of any retribution, these are Federal laws and there is no grey area. And, to give an example of how unforgiving the Federal law, especially 18 USC § 1001, can be, Martha Stewart, despite a bevy of very expensive legal experts, went to prison for just that (and it seems only right, that her initial entry into the light of justice came because of Insider Trading.) For those who were knowledgeable of the adoptions only because of a link to Squires, no matter how negligible you might believe that link to be, that association may be one you soon regret.

Justice for TEDD Handlers has additional information individuals signed for dogs that they then dispersed to family members/friends, thus breaking the agreements.

How were they able to get the dogs “held” for them? More special favors from Squires/Vargus? Handlers didn’t get their dogs “held” for them. This is grossly wrong. There is an opportunity to do the right thing. The Jerry/Jean team should work just as hard to reunite the handlers as they did to hide the dogs for the last two years.

Again, Justice for TEDD Handlers requests that, based on the multiple instances of perversion of the law and policy, of which we are only beginning to scratch the surface, all of the adoptions be voided.

The Army should exercise the penalty for violating the agreement by assessing the monetary penalties for giving away or selling the dog. We are asking for each dog to be returned in lieu of the penalty assessment.