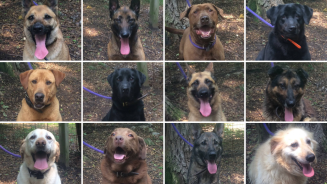 12 of the dogs Soliden tried to sell

Dakota with her handler
The US Army, Office of the Provost Marshal General, released thirteen (13) Military Working Dogs to Soliden Technologies LLC (Soliden) on 10 February 2014. Per Katherine Brennan, Deputy, Law Enforcement, OPMG (in correspondence to a handler’s family member), Soliden adopted the dogs on 3 February 2014.

Ms. Brennan wrote that the adoptive group was “an organization that trains service dogs.” Who told Ms. Brennan this obvious lie? A simple Google search of Soliden would reveal no link between a service dog supplier and Soliden’s core business, “Security Systems Services.” But, either Vargus or Squires signed the adoption forms, despite the fact that the current law governing the free adoption of MWDs, Title 10 USC § 2583, stated the following:

c) AUTHORIZED RECIPIENTS.—Military animals may be adopted under this section by law enforcement agencies, former handlers of these animals, and other persons capable of humanely caring for these animals.

Did the “other persons” referenced by the law seem to create a loophole to claim, for public consumption, that MWDs adopted by an “organization that trains service dogs” qualified?

The Convenant Not to Sue with Indemnity Agreement form used for the event stated limitations to use of the dogs:

“…the MWD will not be used for any illegal purpose, police or security related activity, private business activity, substance detection either public or private nor be given or sold to another person in consideration of the transfer of the above described MWD to recipient by the United States Government and the Department of Defense, through its agents or representatives’ receipt…” 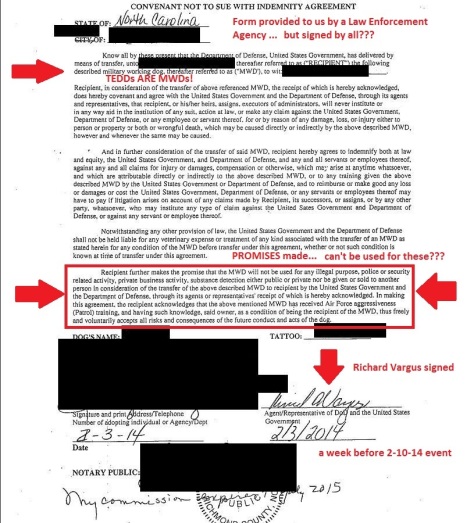 How did a claim of a service organization, training dogs for disabled veterans, enable the adoption officials to provide Soliden with this enormous number of valuable dogs, without even paying the $5.00 notary fee?

Fast forward to over a year later, June 2015, and numerous conversations/emails between the kennel owner, another of the many victims of this adoption failure, and Vargus and Squires:

5 June 2015 email to Squires: K2 Solutions said “you and Vargus facilitated transfer” to Soliden. Dogs had been at the kennel in Virginia since 10 Feb 2014.

5 June 2015 telephone conversation between the kennel owner and Vargus: Vargus was fully informed of the plans of Dean Henderson and Jaime Solis (Soliden) attempts to sell the dogs to various foreign governments: Panama, Ghana and Colombia. At that time, Vargus was provided information relevant to a felonious act by Soliden.

8 June 2015 email to Vargus: complete details of the actions of Solis and Henderson and their attempts to sell the MWDs. All email sent to Vargus’ official .mil address. Information relevant to commission of criminal acts provided a representative of the US Government, Army, Office of the Provost Marshal General.

9 June 2015 Vargus email to kennel owner: Vargus does not request kennel owner to forward text to him for an investigation; however, he did request third party’s phone number.

10 June 2015 email from Squires: requested by Vargus to handle the issue. Tells kennel owner he will “get the dogs adopted out” and “handler…more than willing to adopt.” Squires then requests the kennel owner discontinue using his .mil address and direct all further official business to his .gmail address. Note: In April 2012, DoD required all PII correspondence conducted on .mil.

10 June 2015 Facebook post: Jean Culbreth claimed that she received a call at 2 am, this date, requesting her to “rehome” dogs that had returned from a “black ops.” Culbreth, although referencing these same MWD’s, erred. The 12 remaining dogs never left Virginia after being dropped at the kennel on 10 February 2014. Culbreth’s comments on FaceBook were erroneous and scurrilous, in regard to the kennel master who fed and protected them, but she, apparently, parroted what she was told. NOTE: Squires and Culbreth are associates. Jean Culbreth was instrumental in the adoption of dozens of dogs to locals in Lenoir County, NC. Most of these same families refuse to reunite the dogs with handlers or even let them have access to pictures/updates – yet the MWDs are paraded around the county.

In August of 2015, 9 of these 12 MWDs reunited with handlers, and 3 were adopted by others when handlers were unable to either be located or couldn’t adopt. Sadly, we have no idea where Dakota is. Solis and Henderson bartered her for veterinarian services. OPMG hasn’t retrieved Dakota despite the illegality of her transfer and the knowledge of her location. Soliden refuses to pay the kennel costs which were estimated at $150,000.

Justice for TEDD Handlers suggests the Department of Defense, Inspector General, reviews 18 USC § 4, for a start.